At present, Jeff Taylor is our only Platinum Life Master and the only member of our group to be written up in the NY Times for a Bridge accomplishment.

Here is the write-up in the NY Times from Thursday, December 18th, 2014. It describes one of the hands Jeff and his partner Craig Robinson bid and played at the recent National that was held in Providence.

First there were senior events for players over 50. As the bridge-playing population aged, though, the limit was raised first to 55, then to 60.

Now there are also competitions for players who are 70 and older. The winners of those Super Senior Pairs at the Fall North American Championships in Providence, R.I., on Dec. 1 were Craig Robinson of Lansdale, Pa., and Jeffrey Taylor of Eugene, Ore. They were nearly two boards clear of Leonard Melander and Bert Newman of West Bloomfield, Mich. Third were Dennis Kasle of Bloomfield, Mich., and John Solodar of Palm Beach Gardens, Fla.

The winners did well in the diagramed deal from the final session.

Note the two-spade raise by Robinson (North). This was correct with a side-suit singleton, although it risked resulting in a 4-3 fit. But the alternative, a pass (not two clubs), would have been tactically bad and, as here, would have risked missing a good game.

West led a low diamond. Taylor (South) won the trick with his queen, returned a diamond to dummy’s jack and led a low club. East won with his ace and shifted to a low heart. Declarer won with his ace, cashed the club queen, ruffed a heart in the dummy and led the diamond ace.

When East ruffed low, South overruffed, cashed the heart king and ruffed his last heart in the dummy. Now, declarer led the spade king, which fortuitously squashed West’s queen and permitted Taylor to claim, conceding only two tricks to the club ace and spade ace.

Robinson was the American Contract Bridge League president in 2011, again proving that officials can play, too. 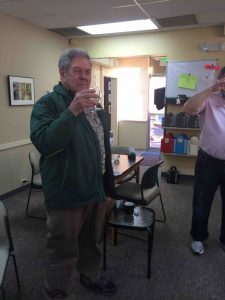 What follows is a write-up from The Trumpet acknowledging Jeff’s Platinum Life Master achievement:

It has been said that the highest compliment anyone can receive is to be respected by one’s peers. Well, if that is the gold standard, then Jeffrey Taylor gets to step up onto the center podium. Anyone who knows Jeff will testify to that. Jeff recently went Platinum. It is appropriate to take a few moments to reflect on Jeff and his accomplishments. The accumulation of the 10,000 masterpoints started in 1959 at Oberlin College in Ohio where Jeff majored in chemistry and minored in bridge. It seems more likely that Jeff had a double major.

Jeff’s first partner was his best friend from high school, Victor Goldberg. Victor immediately gave up bridge for life. Is it possible Jeff was overly critical of Victor’s opening leads? It seems as if Jeff was playing with the big boys right from the start, as he acquired his first red points playing with Kit Woolsey in 1962.

Graduation from Oberlin came in 1963 and his journey toward 10,000 took him to Oregon, Australia, the Marshall Islands and back to Oregon.

Over the course of those many miles, Jeff’s bridge accomplishments were many, including making the quarterfinals in the Grand National Teams in 1974 and winning the Intercollegiate Par Tournament in 1963 to name just two. Jeff’s best year point-wise was 2012 when he amassed the impressive total of 633. That would be a lifelong accumulation for most of us mere mortals.

Jeff has also served the bridge community and District 20 in several official positions. He was president 2001-02, ACBL Board of Directors representative from 2005-10 and district President again 2011-12.

Away from the bridge table, you might find Jeff on the tennis courts, running trails (one marathon and a few triathlons) or underwater (over 1,500 dives).

In the ‘real world,’ Jeff earned his livelihood primarily as a teacher at the high school and college level. He and his wife, Linda, spent 15 “great” years in the Marshall Islands as a teaching couple at Kwajalein Missile Range.

Speaking of Linda, Jeff and Linda (Crowley) were married in 1966. It probably should not come as a big surprise that both children, Kathleen and Russell, grad- uated as merit scholars. When asked if she had any comment on all of this, Linda said, “I am very pleased that Jeff made Platinum Life Master and I have no regrets for his hobby.” Now that sounds like the perfect partnership.

Some 55 years after receiving his first masterpoint, Jeff reached 10,000 playing with Paul Craviotto at the Emerald Bridge Club in Eugene on Jan. 23. 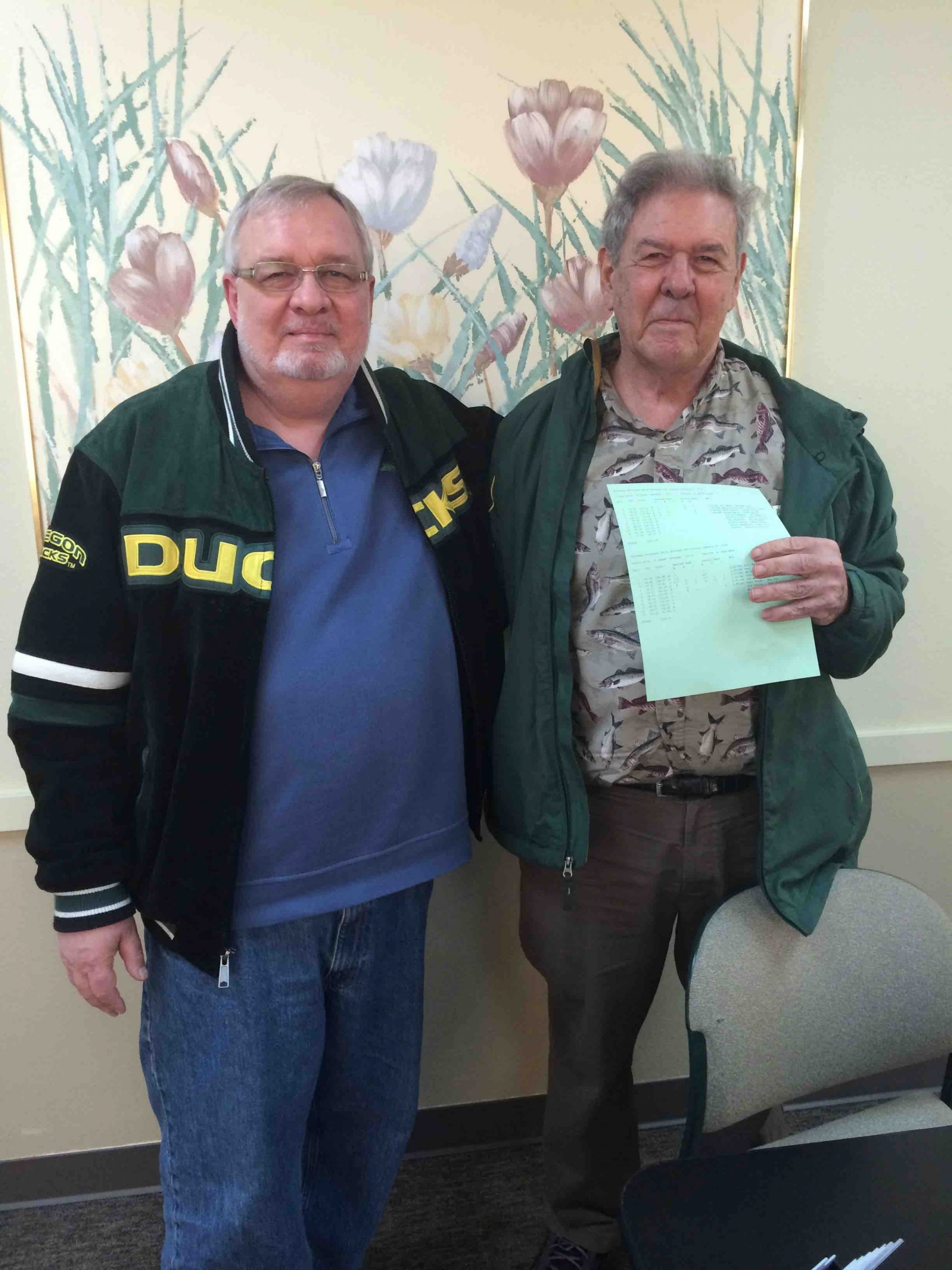 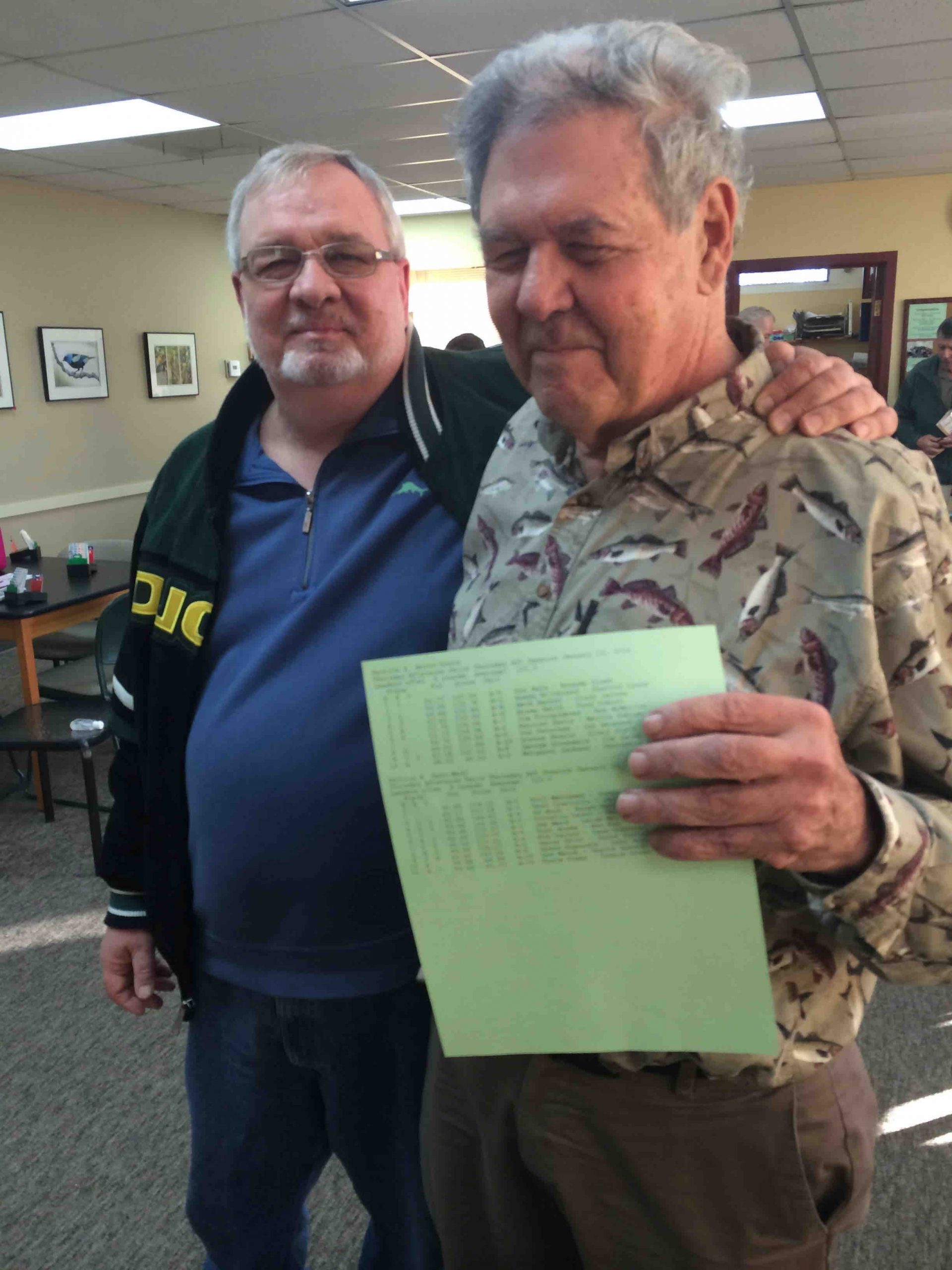 In some way it seems very fitting and appropriate that Jeff reached the platinum level playing at the local club because, while it is true that Jeff has traveled widely and played at the highest levels nationally, it is also true that he has been a huge supporter and promoter of bridge at the local level. Jeff gives of his time willingly and graciously, whether it is offering advice on a particular hand or leading discussions regarding the game we all know and love.

All the members of the Eugene-Springfield Bridge community take special pride in claiming Jeff as one of their own and extend their heartest congratulations to him on such an amazing accomplishment.